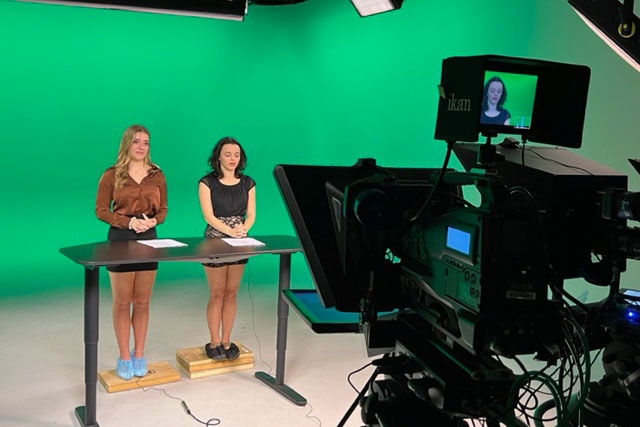 The provost’s office approved the new concentration this spring, and students will be able to take three new courses that are specific to that concentration.

“We have seen growing interest from students already enrolled at Baylor in learning about broadcast journalism, and also from prospective students who have had the chance to do some broadcast work in high school,” said Bruce Gietzen, Baylor’s Director of Student Media.

Some of that interest was sparked by Lariat TV News, one of the six platforms under the Lariat student media umbrella.

“As Baylor’s Student Media Director, Mr. Gietzen has added many new elements of broadcast journalism to the Lariat over the last few years,” Chair Mia Moody-Ramirez, Ph.D., said. “The new concentration, in particular, will have a tremendous impact on the department’s trajectory for growth.”

In 2016, Lariat TV News had three students posting broadcast content on the Lariat website. Interest grew and in 2018 students started producing a weekly newscast for the first time ever at Baylor.

This past year there were 19 applicants for the 12 spots on the LTVN team, which is part of more than 50 students working on print, digital, broadcast, yearbook, magazine and sales and marketing teams. They are all paid an hourly wage in the federal work-study program and have story quotas to meet each week.

“One of the key reasons broadcasting is attractive to students is there are jobs available when they graduate,” Gietzen said. “I’m told every year by TV station news directors they can’t find enough good people to hire.”

Students will take a series of core journalism classes, then have the opportunity to select three broadcast-specific courses. Broadcast Writing, which addresses the core competencies of being a multi-media journalist, is the first one. They will also have a Videography for Broadcast class, and an Advanced Broadcast Reporting/Producing course to complete to earn their degree.

“Our placement rate for graduates from LTVN has been exceptional, and news directors are now asking every year who we have graduating that they could hire,” Gietzen added.

“I like Baylor’s DNA on their broadcast students, and the training they get in the program,” said KEZI-TV News Director Matt Templeman, whose top-rated station in Eugene, Oregon, has hired Baylor graduates as reporters each of the last four years.